Last report, I wrote about how easy it was to get a weekend away outside of Singapore, but what I neglected to mention, is the beautiful places to visit here in Singapore. Although it is possible, I am sure, to traverse the island using only underground connections from MRT/Subway to and shopping centre and then from mall to mall, if you do pop your head above ground level, outside of a shopping mall, it is quite a beautiful island! We are starting to go out for walks on Saturday mornings, and the last two trips took us to MacRitchie Reservoir and to Telok Blangah Hill / Mount Faber Park.

MacRitchie is a man-made reservoir, constructed in 1867 through a private donation to supply water for the population of Singapore. The reservoir still feeds into the water supply, but is mainly used now as a popular spot for nature lovers and exercise enthusiasts. Shanhong and I could never be called exercise enthusiasts, so we ignored all the fitness corners and exercise benches, laughed at all the joggers, and simply admired those kayaking on the reservoir itself. Firmly associating with the nature lovers, we took one of the many trails that led through the park, and soon found ourselves in the middle of forestry with not a skyscraper in sight! We were treated to monkeys and lizards, however!

Telok Blangah Hill Park has a history that few other parks can boast about. The park has long been a place of gathering for trading communities which flourished at the site since the early nineteenth century. The park now connects to Hort Park and Kent Ridge Park via Alexander Bridge, but we took the forest walk up the hill and toward Mount Faber. The forest walk is an elevated walkway that climbs the hill, giving excellent views of the surrounding area, and out to sea. From the top of the hill we took the path across 'Henderson Waves'. 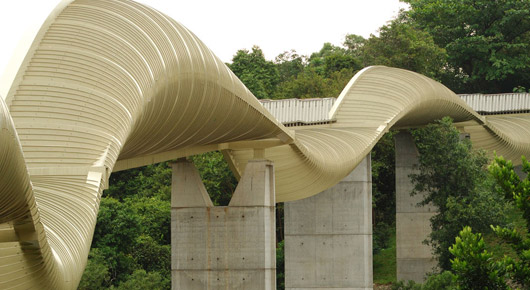 Henderson waves is a 274metre-long pedestrian bridge connecting the two parks, and the highest pedestrian bridge in Singapore. An architectural wonder, the wave-like ribs double up as shelters - and the bridge has become a popular spot for wedding photography.

As you'll have noticed, Mount Faber is one end of the Cable Car - the other being on the small island of Sentosa, home of Universal Studios and the few beaches of Singapore. The 'Jewel Box' cable car is a famous part of Singapore's heritage and has won many awards, including the first glass bottomed cable cars in the world, the only company to have a full sized lego cable car, the first to offer sky-diving in the cable car, and this year, the first to have a seven-star VIP cable car encrusted with Swarovski crystals both inside and out.

We didn't ride the cable car this time, but Shanhong did check out the award winning toilet facility!!